She believed she could, so she did: Interview with our Americas CEO

She believed she could, so she did: Interview with our Americas CEO

Since its conception, the Tech world has been largely male dominated, with women holding fewer roles, fewer leadership positions, and often less pay. This trend continues, even in the 2020’s.

Nancy Stango, FFW’s CEO of the Americas, is no stranger to pursuing her dreams in this industry, where women continuously make up less than half the population. Starting with a love and passion for computers at an early age, to owning one of the top-growth tech companies in the country, she’s been able to persevere and prove any doubters wrong.

In this interview, Nancy talks about her journey of how she built an industry-leading digital agency, and her advice for women out there aspiring to excel in the Tech industry.

When did you decide you wanted a career in technology?

My parents got me my first computer around twelve years old, and I fell into the world of computers and programming. Home computers were by no means mainstream back then, and certainly not built for child accessibility as they are now. I always liked to tinker with things and enjoyed building electronic gadgets at that age. I loved the challenge of things not working the first time and trying to solve the puzzle. My parents wanted me to be a doctor and had some doubts about me pursuing a career in Tech. It wasn’t something girls usually were interested in or did. I was actually only one of only two women in my class in college.

How did you end up starting your business, which would later become FFW?

I started with a series of experiences working in different roles -- programming, solutions architect, presales for both fortune 50 companies, and startups. I had kids and worked through most of that time. By the time my daughter was four, I knew I wanted to do more and build my own business. It was a good opportunity to take a leap career-wise, because my kids were past the baby stage and we weren’t dependent on my salary to get by.

Some people start businesses with a client already in mind to have some sort of income going in, but I didn’t. I started by building a free website for my brother, then moved to a $500 website for a local handyman, then a local attorney. We had grown from a small handful of employees, with some even working from my own home, to an award-winning global digital agency with offices across the world. We transformed from developing five page websites for small businesses, to helping Fortune 50 clients with million dollar digital projects, including development, digital strategy, design, and so much more.

What struggles did you face early on?

Not having a guide or knowing where to start, and having to figure everything out from scratch was one of the most difficult parts. You start your business, put up the sign, but then it’s like, ”Okay, now when’s the phone going to ring with a new client?” There’s a lot new owners must figure out on top of financial struggles. And it can take a long time to make a profit.

I found guidance by joining networking groups, some specifically for women. The women’s networking groups were often the most helpful because the women really tried to help each other succeed.

Many women are struggling with having to balance work and child care because of COVID-19. How did you balance being a mother and raising your children while also growing and leading a global digital agency?

I feel so much empathy for coworkers I see trying to do their job while holding their baby and taking care of their kids. It’s important to have a good mental balance; Accept who you are and what you’re doing. Don’t embrace feeling guilty. When I would spend time with my kids, it would be high quality. I had a contract with myself, that certain times would be family time and one-on-one time, and other times would be focused on other areas.

What advice would you give to aspiring women entrepreneurs in this male-dominated industry?

Persistence and not letting things knock you down. If someone or something knocks you down, you learn from it, pick yourself up, and believe in yourself. Embrace who you are and what makes you special. Being a woman is one example of diversity in the workplace. We all are different in some way. This is what makes teams stronger together.

Networking and support groups are very important when starting out. Don’t try to do it on your own. Look for coaches and mentors as well. A great coach is an amazing investment for you and your business. I saw my own coach as a sort of Fairy Godmother, because she helped me so much. She was working with me when I got an award for one the fastest growing women-led businesses, which was one of my proudest moments.

You used to have a mural painted on your wall that said,” She believed she could, so she did.” What did that mean to you? 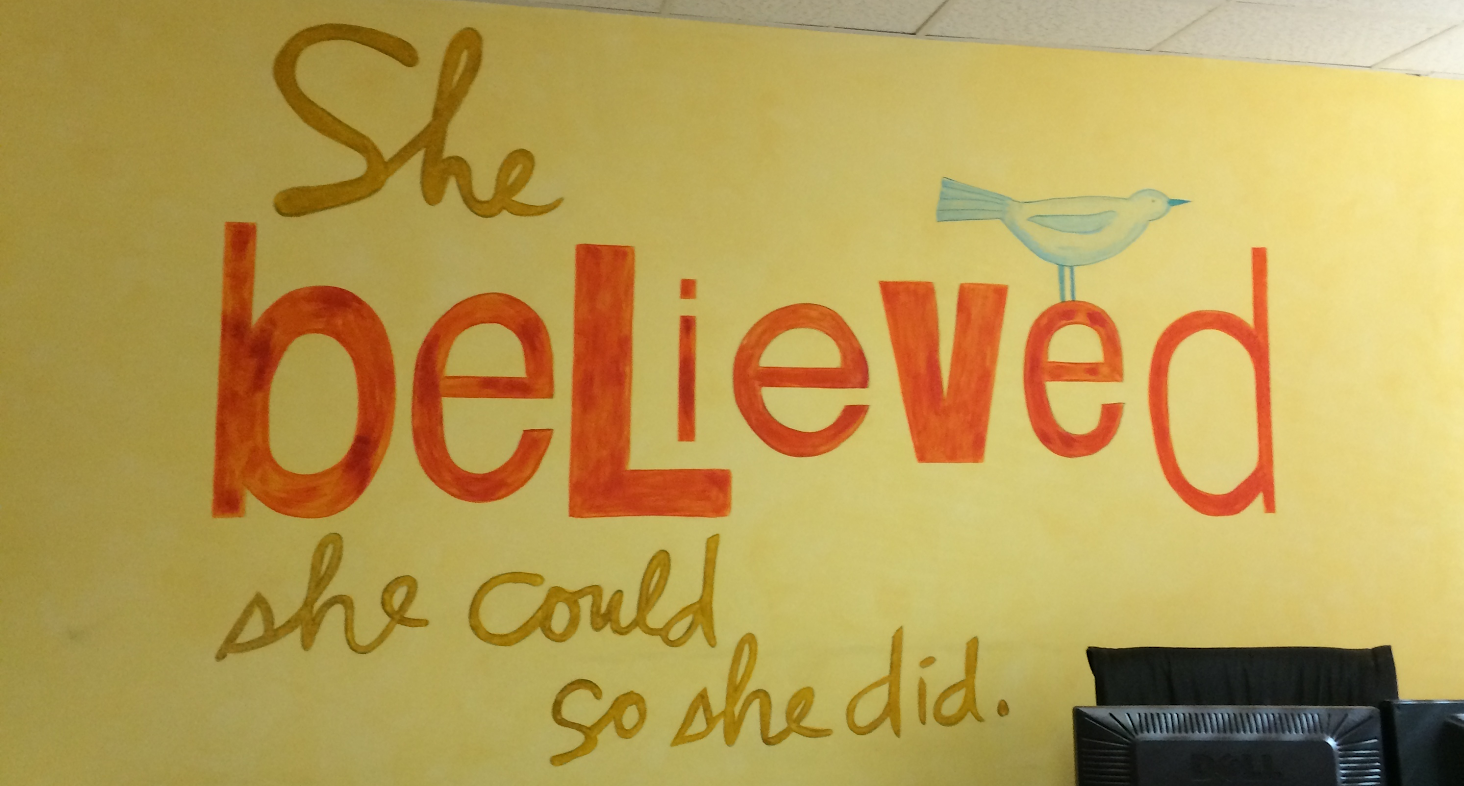 It’s really about believing in oneself. One of our earliest clients had a very large website, so we had the opportunity to do next level work. His business was in self improvement, and as a part of working on this website, I was very involved with learning more about the topic from self improvement experts. That’s when I was introduced to the book, “The Secret,” and the law of attraction -- basically the belief that you can manifest what you want in life by putting it out in the universe. When you’re focused on your goals and you work day in and day out, it will eventually come.

After learning about the law of attraction, I started telling my husband that these things were not only possible, but that I was actually making them happen! He bought me a tile with that quote, and I eventually wanted to paint it on my walls so I could focus on the message.

“Nancy believes everyone has their own superpower. If she sees you not using yours, she’ll push till you find it and grow it. I’ve witnessed her invest deeply in many people over the years to help them grow and flourish. She has many loyal fans because of this quality.” - Valerie Peterson, VP of Client Engagement at FFW

Being part of the Tech community, we all have a responsibility to create a more equal and fair environment for women to thrive. One of the ways FFW is committed to this is through our ongoing support of GirlsGoIt, a non-profit organization that empowers and encourages young women to pursue careers in the IT and development fields. GirlsGoIT supports its mission by creating educational and applied training opportunities in development. You can learn more about supporting this organization here.

Nancy resides just outside of our NYC Metro office, she can be found frequently traveling between FFW’s many offices around the world. Learn more about Nancy Stango.