A financial platform fostering good in its community.

Eastern Bank in 2018 celebrated its 200th anniversary as the oldest and largest mutual bank in the United States. In its home state of Massachusetts, Eastern Bank is dedicated to community involvement, and in 2017 the bank launched a new brand campaign titled “Join Us For Good”. In 1999 Eastern started the Eastern Bank Charitable Foundation, where the organization donates 10% of its net income each year to various charitable organizations that provide services to people across the Commonwealth and in parts of Southern New Hampshire.

As part of a redesign, Eastern Bank wanted to make Easternbank.com more congruent with its new brand positioning, as well as bring its platform up to modern standards. It also wanted to update its Join Us For Good informational website, and to have both platforms improved in time for the launch of the Join Us For Good campaign. 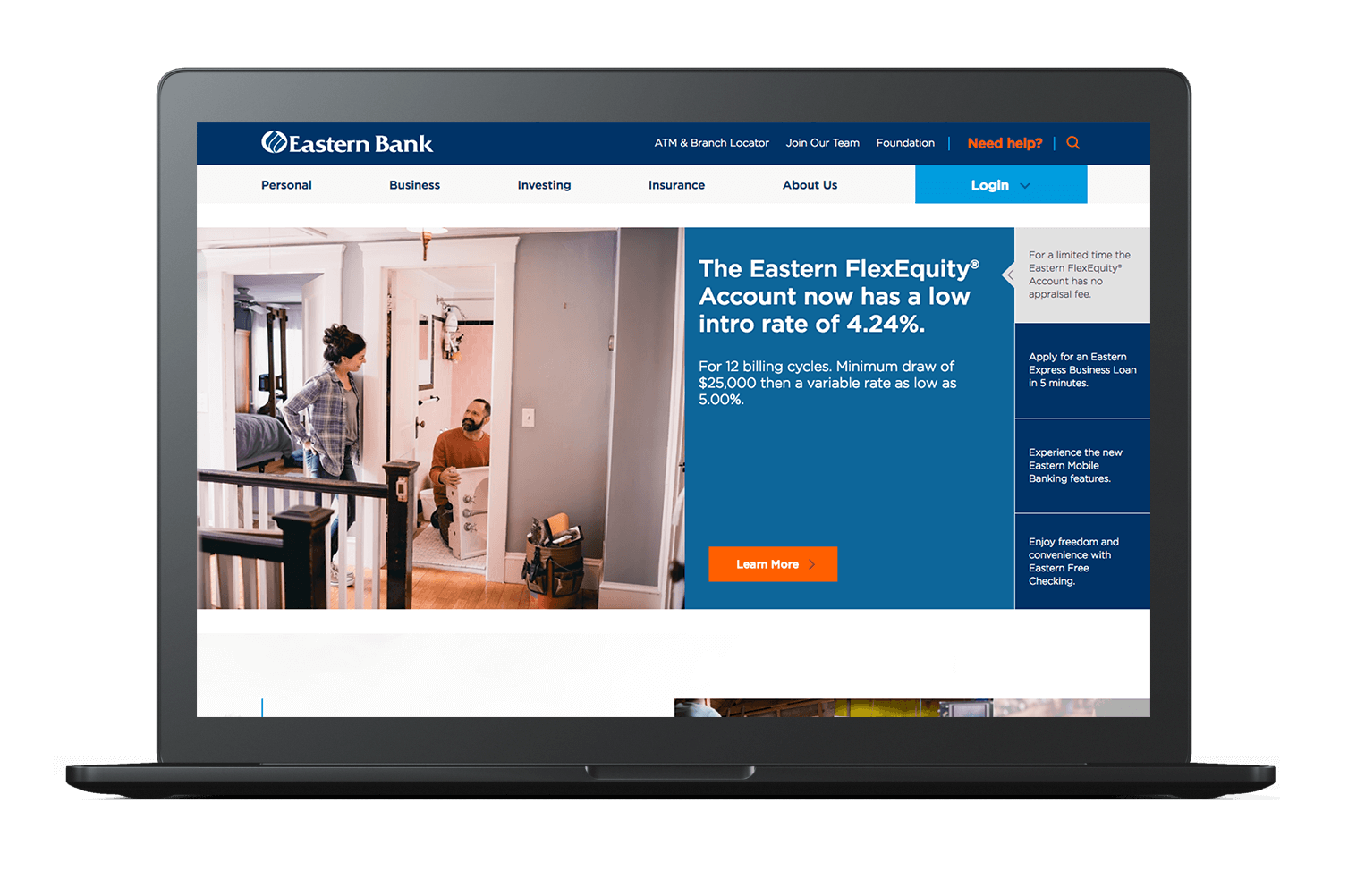 Eastern Bank was struggling with a number of microsites that had been built up and not maintained in response to one-off campaigns. The team needed a platform that would allow them to quickly build out campaigns and marketing initiatives without expanding their site infrastructure. The previous platform was running on an outdated version of SharePoint, and the end of support for the software was nearing, which added an extra layer of urgency to the project.

Additionally, the new website needed to support Eastern Bank’s rebranding efforts, initially through direct support of the Join Us For Good brand campaign, but with a sustained goal of representing the bank’s brand purpose: “We do good things to help people prosper.” The team wanted the new website to better showcase Eastern Bank’s products and services, and provide a better platform for internal-facing initiatives within the company. 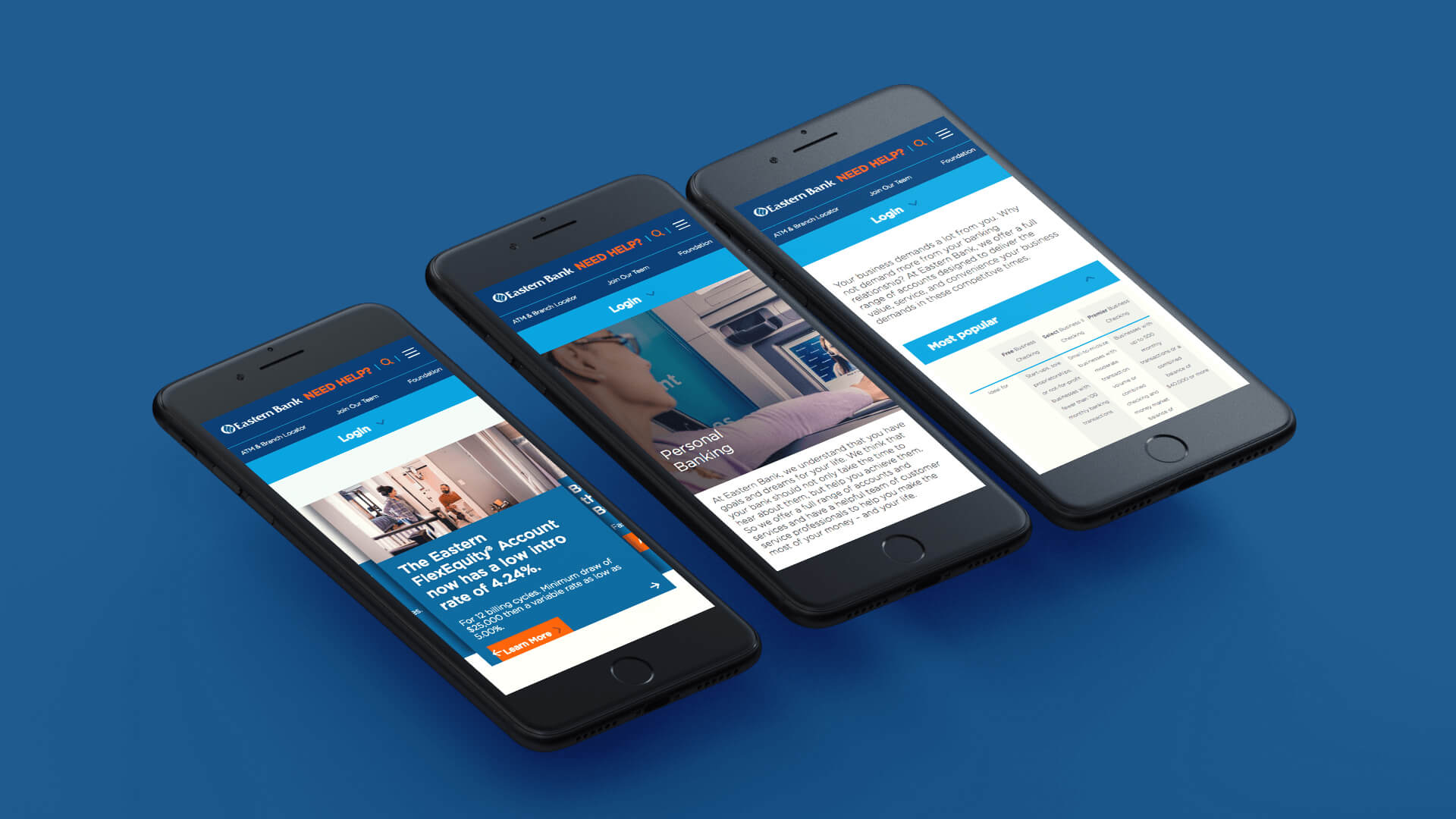 Embracing a Drupal and WordPress solution

To help Eastern Bank better serve its patrons, FFW constructed a mobile-friendly design to showcase the best of the Eastern Bank brand. The new homepage welcomes customers and prospects as if they have walked into a local branch, promotes the most important content from the different sections of the website, and guides the visitor to the sections most relevant to them.

The site itself was rebuilt in Drupal 8, with a newer, flatter information architecture that provides users with quicker and easier access to important products and services. To prevent infrastructure sprawl, FFW developed a multisite solution that allows the Eastern Bank team to easily spin up, deploy, and manage microsites for specific campaigns or marketing initiatives. As part of this, the team designed and implemented a component-based architecture to allow the Eastern Bank team to re-use common display widgets and features across the site and microsites. Additionally, the site was integrated with Eastern Bank’s internal APIs, and connects to a wide variety of digital tools that the Eastern Bank team uses to serve their community.

On the back end, FFW built an improved content management layout, tools, and workflow to let Eastern Bank’s team edit content in place and easily move reusable blocks around as needed. The content workflow was built according to Eastern Bank’s compliance standards, with controls to allow only certain users access to certain levels of content and administrative tools.

Lastly, an independent WordPress site was developed for the Join Us For Good initiative. This is a simple publishing platform that allows the Eastern Bank team to share the word about various charitable works and community-improvement initiatives that the team is undertaking. The Join Us For Good platform doesn’t integrate with the larger Eastern Bank site, and was designed to allow Eastern Bank’s marketing and content team easily publish and push content about their local communities. 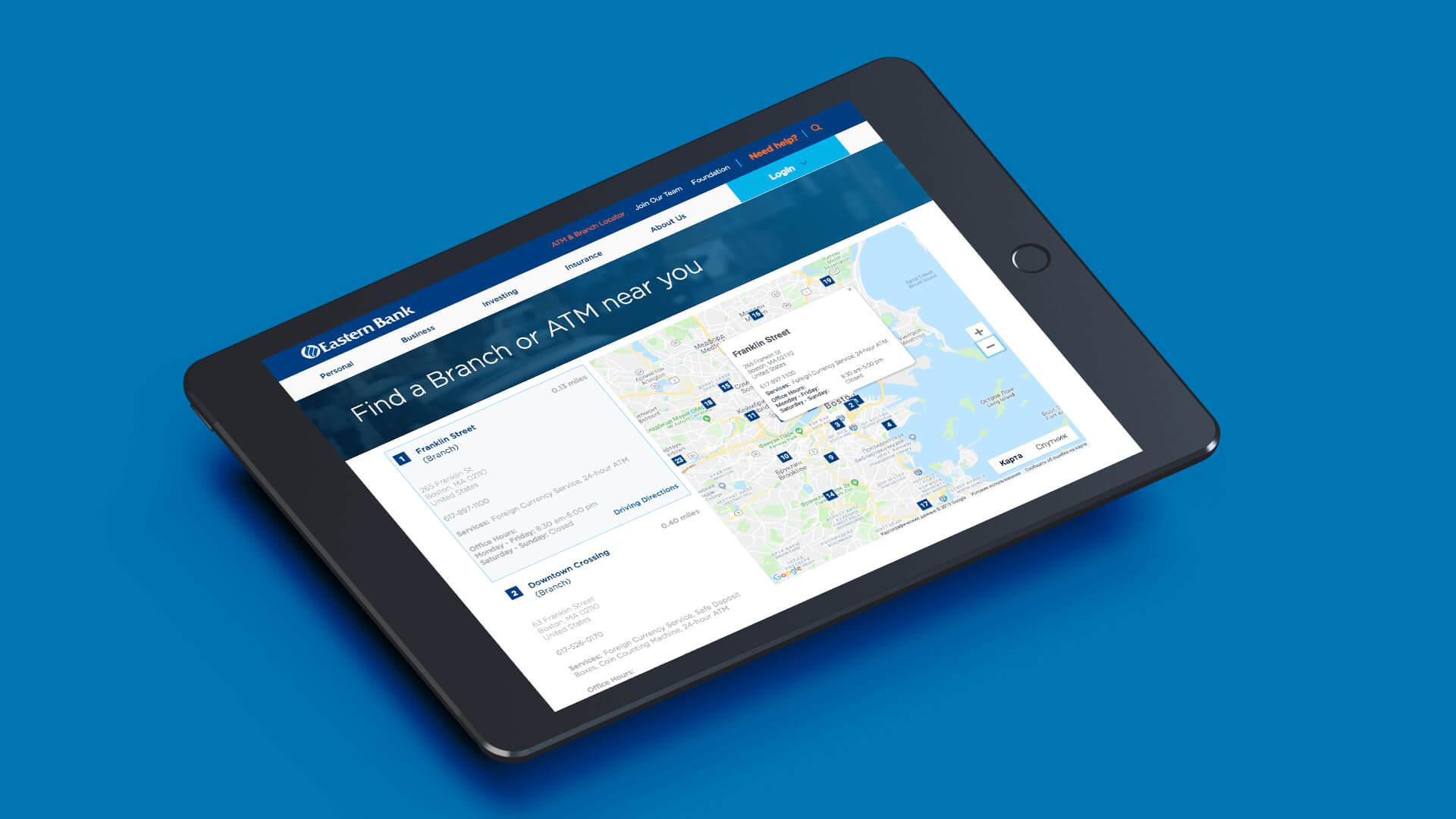 Serving every user, no matter their needs

The new platform was launched according to Eastern Bank’s firm timeline, and has been well received by both the internal team and external users alike.

Chief among the results is enhanced security and testing features to ensure that users are always able to easily and securely log on. Every site update is tested prior to launch to ensure that users’ sensitive information is protected. Additionally, the Eastern Bank and FFW teams designed a process to rigorously assess any security reports they receive from any sources, and the teams work together to proactively protect Eastern Bank’s clients’ information.

It’s also important to note that the new platform is fully ADA compliant according to WCAG 2.0A and AA compliance codes. This was important to the Eastern Bank team not only from a standpoint of legal liability, but because the bank is fully committed to compassionately serving a diverse community of Massachusettsans. Every element, page, and part of the new site is fully accessible, regardless of how small or insignificant the feature is.

The boldest plans start with a single conversation. Let's start ours.